This part of December leading up to Christmas is always so filled with decisions... what should I get him/her? Will they like it? Where should I buy it? Can I really afford it? I thought I would add a few design decisions into the mix!

Last week I remembered a holiday flimsy I have had in the closet for a few years. It is a holiday wreath done in the watercolor technique using fusible interfacing to compose and fix the pattern before sewing it together. The set of prints I bought for it had a great border print that went with it so the top as it stands was a slam dunk once the middle was done. It is around 60" square or so... a bit of an odd size. Too small for a throw, a little too large for a wall hanging and I always felt like the wreath was lacking a little something. I had thought about some sort of applique ribbon or bow on it but I had NO desire to try to hand applique through the layer of fusible interfacing and that was what I was most familiar with. So, like so many projects, it got put away awaiting further inspiration.
Then this spring I pulled it out to show my quilting ladies as an example of the watercolor technique. Also this spring I came across the Don't Look Now blog and read about her raw edge machine applique technique. I even tried it out making a hair bow keeper/organizer for my daughter. It eventually percolated through my head and I realized that could do that on the wreath! So, with the holidays approaching I thought I could pull that out and actually get it done before the holiday... maybe... OK, don't hold your breath. But at least I could get some embellishment on there and see how far I get quilting it (that always seems to be my obstacle doesn't it?). So that is on my design wall today. Decisions to be made... 4 or 6 wraps of the ribbon?, all one color?, which one? or a combination?  I think I know what I want to do, but I will go through the process so you can tell me what you think, just in case I am out of my mind. 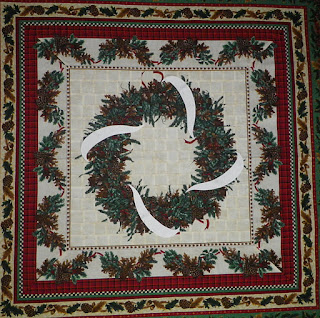 First I decided that I would not shoot for a 'realistic' ribbon with lots of shading and twisting with each wrap. It would never really look realistic and it would be better to make it representative, to get the feel of the wrap without having it try to duplicate the actual details. Then once I had the shape done in paper, how many would fit and look right? Four looks right for a single ribbon wrapping the wreath but it still looks a bit sparse. Odd numbers are usually good in design, but five was just wrong in this case, no spacing looked right with five. I moved onto six (and this photo shows more of the border). I like the six. 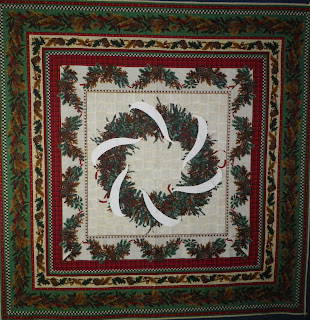 Next came the color... I pulled reds from my stash and choose the best one. Then I noticed a nice gold I had laying out for something else and thought that might be nice too...
I was surprised to see what jumped out with the different colors. The red border, obviously stands out with the red ribbon, but it looks a little monochromatic because there is so much red. The tan element and the pine cones and nuts in the border print are really emphasized with the gold ribbon. Then my final idea was to divide the 6 wraps into groups of three and do half in red and half in gold. 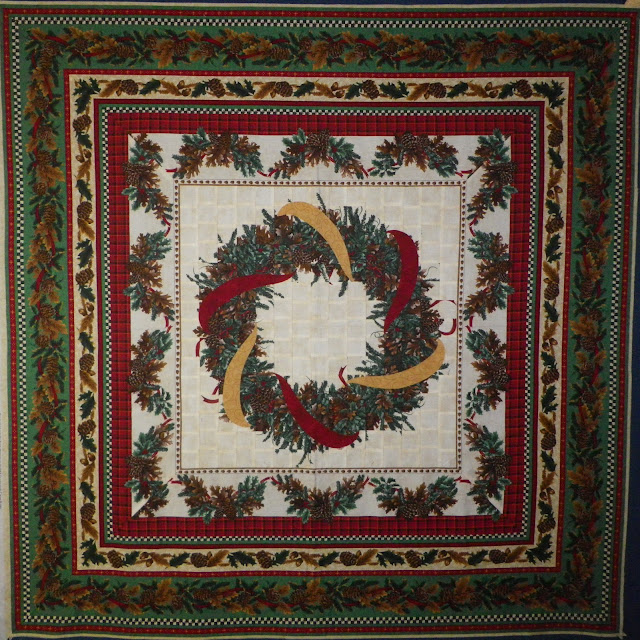 So what do YOU think?
Argh! Looking at these photos and knowing that I have a little bit of the gold left and a few yards of the red I am now thinking that maybe I could add a couple borders to echo the ribbon in the center (narrow gold, wider red) and make the top a more respectable and usable size.... NOooo! I want to be DONE! Well, I have to go put the fabric for the backing in the drier (I washed the red so minimize the chance of bleeding). Sigh, more decisions!
What is on YOUR wall today? Check out the blogging world's walls over at Patchwork Times.
Posted by Eden at 10:03 AM