Squeaking it in under the wire... 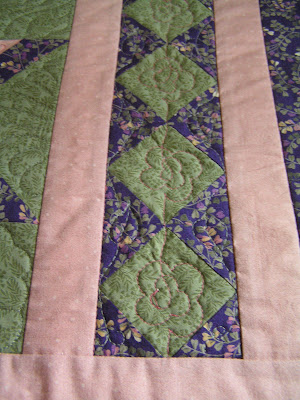 This is all about my free motion escapades this month practicing leaves, and more leaves for the Free Motion Challenge hosted over at SewCalGal.  I have done leaves similar to this before...but mine are often in a line or a border (these are in the purple triangles between the green squares that have flowers in them) and I use the center spine of the leaf to move onto the next leaf stem so they all look like they are in a waving line. The leaves for the January FMQC tutorial this month were a little different. Here are my practice attempts. 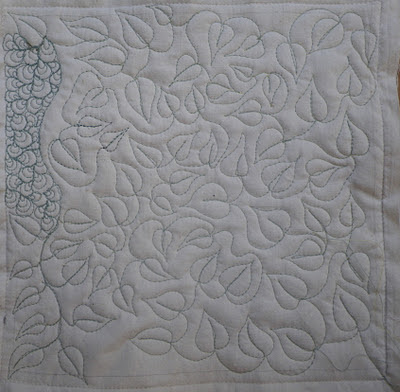 This was the first attempt. The leaves are too small to be practical on a large quilt. I did get tired of them over there on the left and tried a stem of leaves to see what that would look like and then filled in what was left with a filler design ala Susan Day. I don't recall its name, but as a Zentangle it is called Whirlz. 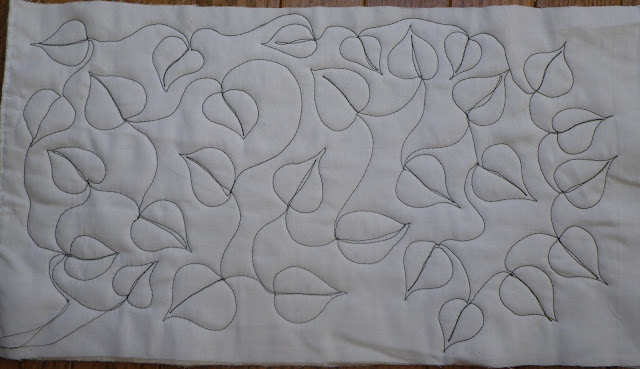 Second attempt... bigger leaves but terrible placement! those on the right are the ones that look like Christmas lights! 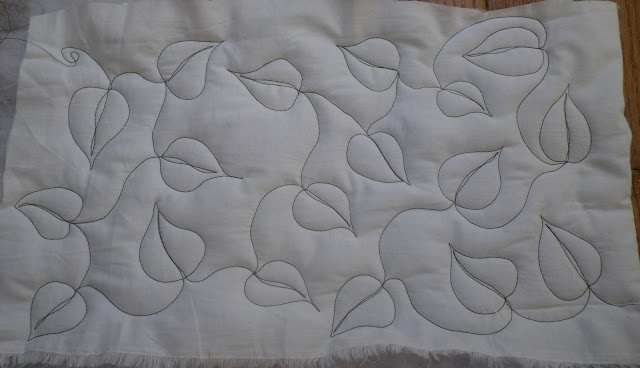 The final attempt with some fluffy batting. I liked this one the most; fairly consistent leaf size, decent distance between them and pretty random placement. I would not bet on this happening again if I tried, but it is a matter mostly of practice. I seem to hit it off pretty well with beginners luck at first, then I think about it too much and eventually I get the hang of it. I think if I had some structure I would do better, like a pieced block to quilt over. The lines of the patches would give me some reference.

I have learned, as if I didn't already know, that my coordination while free motion quilting (small things anyway) is not too bad. However, the 'planning where to go next on the fly' definitely needs work! Way back when I began FMQ a few years ago I found that a small glass of wine did wonders for my meander quilting (see below).  I am not sure the same would apply to this kind with the leaves. There are many things to keep in play in your mind's eye... keeping them all evenly spaced and not quilting yourself into a corner, keeping them all about the same size AND not making them face all the same direction so it looks like a string of Christmas lights (although that would be a cute quilting pattern on the right quilt). Lots of things going on. In the past I have done more quilting to a sketched line and I do fine with that... I will have to practice, practice, practice the magic of making it all even and random.


I can't wait for the February tutorial!
Posted by Eden at 8:24 PM

Email ThisBlogThis!Share to TwitterShare to FacebookShare to Pinterest
Labels: FMQ