Oh my goodness, it has been a LONG time since I posted! I have actually been doing a fair amount of drawing while listening to parts of my classes... but it is all in my notebook on lined paper with whatever pen I have in hand and looks something like this

The Diva Challenge this week did catch my attention, however. While I was being bad and unmotivated and not folding the laundry or doing schoolwork last night I sat down and watched stupid TV and did this... Happy New Year and Happy Valentine's Day at the same time! 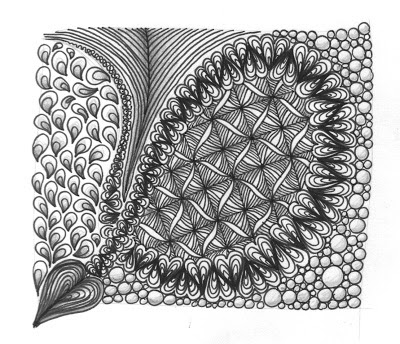 These are other random ones that have made it into the sketchbook for challenges but not made it onto the blog in time for the challenge itself...first Auraknot with Bunzo with a little Diva Dance thrown in... only it looks vaguely like a uterus and fallopian tubes to me so it is sort of tainted in my mind... now I can't see it as anything else. I hate it when that happens... I can't ever use Prestwood for that reason! 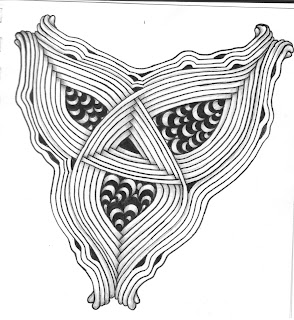 I liked this peice... more challenging than my usual string because there were lots of little areas to fill in. I usually choke and fill at least one area in with something that doesn't "go" or just turns out badly, but this isn't too bad... the Mi2 could be better I guess. It also includes a couple of areas of Dansk for the UMT challenge a few weeks ago. 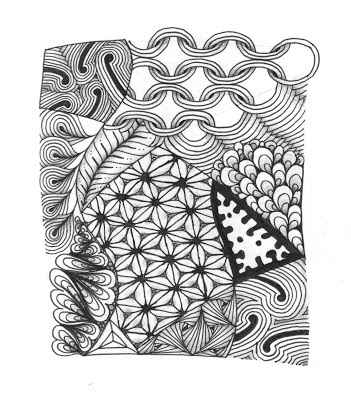 And this one was to try out the tangle on the upper left - the name of which escapes me at this instant, but I really like it. I had also gotten into a bit of a curvy, free form rut and wanted to remind myself how to do some of the great grid based tangles out there, and have a chance to use B-Rad's Phicops again as well - love that one! 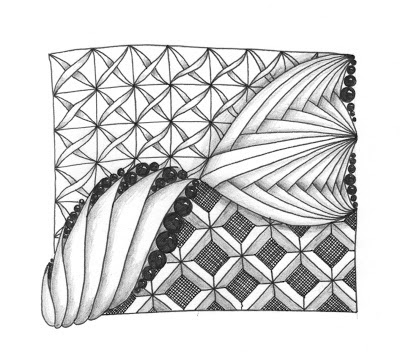 SO that's it from here... super busy with three classes - lots of reading which I have gotten slow at in my 'age' and lots of the usual kid stuff. March promises to be unmanageable so as much as I dislike February I am holding onto it for as long as possible because I won't have time to breathe in March. Have a great weekend - its a long one for us... teacher furlough day on Friday, presidents' day off on Monday. Maybe I can marshal the troops to get the house in order for once! Gotta run to robotics class!