Friday Finish! More than one... sort of

I have TWO things to 'Whoop' about this Friday so I can link up with "WhoopWhoop Friday" over at Confessions of a Fabric Addict.

This one has been done for almost two weeks, but I was waiting for the big reveal. So, we gave a retiring teacher a quilt that I made for her last night... the one I have been blogging about for a while that has all the names of the children from her classes back to 1997 on it. I started working on it back in January and posted first about it here and then here and then again here. We had a little stressful moment earlier in the week when she told the PTA president that she couldn't come to the meeting to present a student with an award (our ruse to get her to come) because she had plans with a close friend who was coming into town! AHHHH! Her husband swooped in and saved the day; contacted the friend who subsequently fibbed to the teacher about a change of plans and he and the friend and the teacher's daughter all surprised her at the meeting just as we also surprised her with the quilt. I boohoo'ed through the whole little 3 minute speech - it was really quite horrifying. But its over and she loves it and no one minded the tears because they were choked up too.  So here it is all FINISHED! It is called "The Ripple Effect". 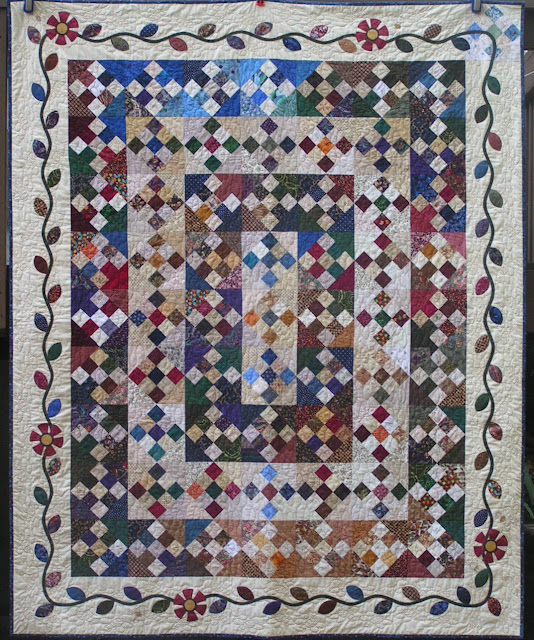 Here is a close-up... all the light neutral squares have student names and the year they were in her class. The bees are because her class theme was always bees. The flowers and leaves are all machine raw edge applique and the vine is finished edge machine applique. 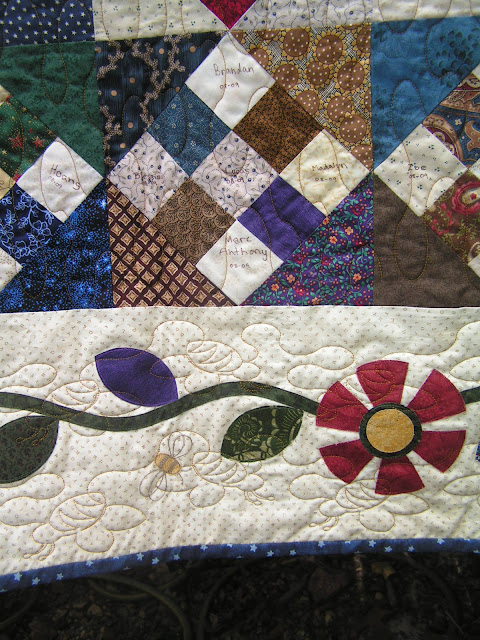 The quilter added the bee quilting in the border which is a little distracting on the front but really cute on the back. 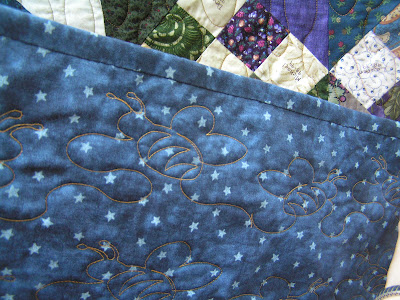 And the backing has a bunch of blocks that the teachers and admin staff at school signed as well as the label. It got put on the quilt sideways by accident, but looks just fine anyway. 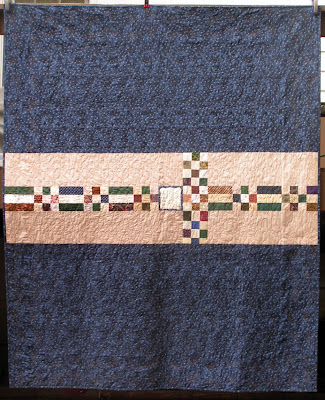 This is the little speech that went with it (you will have to imagine the wavery tear filled voice I read it in *eyeroll*).

As many of you are aware, after 14 years of teaching second grade at CHES this teacher will retire at the end of the 2011-2012 school year. I know a handful of second graders and I thought that surviving thirteen years of second graders called for some special recognition! In her case, thirteen years worth of second graders amounts to nearly 300; the yearbooks say that 296 students have passed through the doors of her classrooms. I thought about the lasting differences she has most likely made in their lives. I also began to think about the many teachers in my own history that left me with lasting lessons and the teachers that have made big impressions on my own childrens’ academic futures. I realized that many of the words and deeds that have left the most indelible impressions have not necessarily been huge watershed moments in time. Sometimes they are, but more often the little things… the trick to remembering the 9 times table, the pneumonic that helps you remember an important series of facts, the well timed compliment or well thought out criticism, the simple, consistent faith in a child’s potential… those are the persistent ripples that propagate over the surface and into the future, the softest of echoes that you hear over and over again. The small things don’t make as big a splash, but the ripples are just as long lasting.  I think that the ripple effect caused by dropping even those small pebbles in a still pond is a very good analogy for the potential effect a teacher can have on a student’s life. Certainly she has had that sort of a positive and lasting effect on many, many of her students. To thank her for that and so that she may remember all of those ripples that began with her we would like to present her with this gift, a quilt entitled “The Ripple Effect” which contains the names of every one of those students who were lucky enough to have had her as a second grade teacher. Thank you.


So that is my BIG Whoop, Whoop! for this Friday. I am also thrilled to be finished with 16 New York Beauty blocks that I started a little over a month ago. I have enjoyed the journey, its not totally over yet but there is NO WAY I would have the patience to make a huge number of these blocks... not at this phase of my life. I do really love some of the color combinations I have here and would love to see a whole quilt of them... but I think a wall hanging will do for now! Here is the almost final arrangement, I think... (the color is bad here thanks to the flash but there is little natural light on this cloudy day) 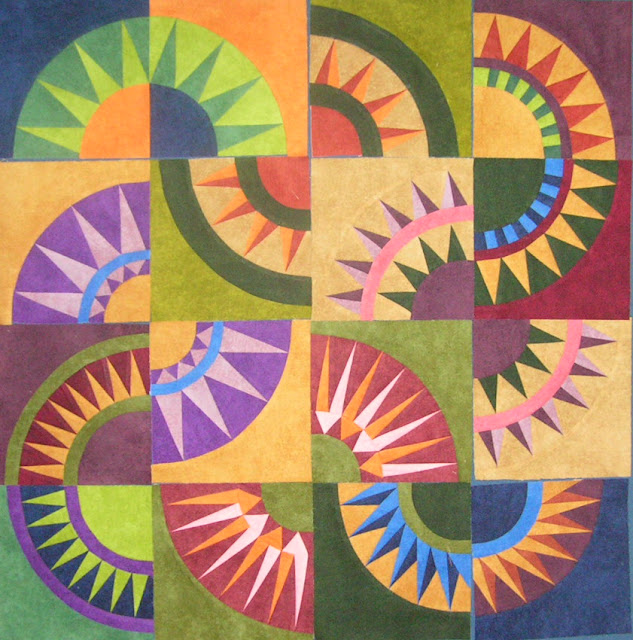 I like the symmetry of the layout, but I think I will play some before sealing the deal and sewing them together. I am also not happy with the pair of blocks with the 8 orange and light pink rays... it is too light (even more so in this picture where everything washed out a bit). I have redone the interior ray band to see if a change there would help... here is the original 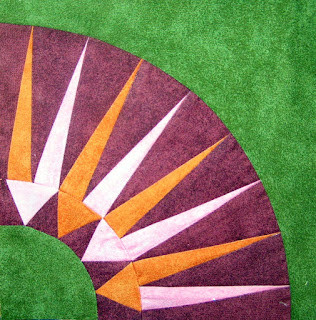 here is the redone inside band done with rays pointing out (instead of in) and in a darker pink... there is less contrast which is why I chose the lighter pink in the first place, but the light pink just doesn't blend with the rest of the color scheme very well. What do you think? Original, the one with the new ray band or a totally redone block with the new inner ray band and the long rays redone in darker pink too (oh please nobody vote for the last one - way too much work!). If I didn't have to be the one to do it I would vote for the last option, I may settle for the middle one... that is only two seams with normal length stitches to pick out... 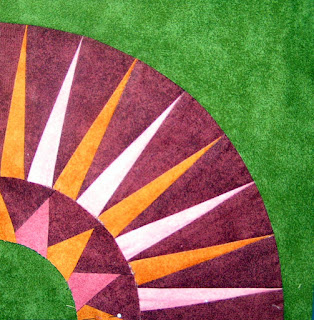 So that is my Friday Whooping. I hope to have some designing for a hand project done by Monday so I can set it aside to take with me on vacation this sumer - it is rapidly approaching and if I don't plan now I'll end up not having stuff to work on while away from the machine. Thanks for stopping by!