I am going to squeak this one in before Friday's post of the new week's Zendalla Dare over at the Bright Owl. I didn't start this until the other night and I really liked the beginning of it. Then last night I had a whole hour during a meeting to work on it but I was afraid of messing it up while dividing my attention between it and the meeting so I did a different one (which I will post later). So I just realized earlier this evening that I only had the rest of tonight to finish and post it before the next one was up! 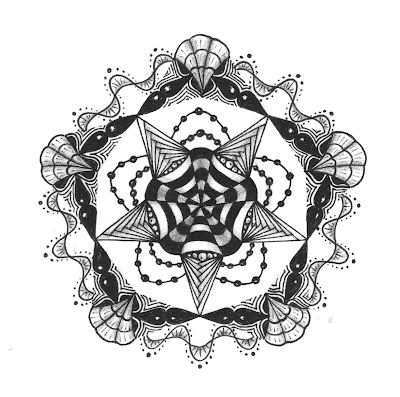 It did not come out at all as I expected, but I listened to the shapes and what they were telling me they were 'supposed to be' and this is what came out. I included... Flutter Pie, Betweed, Black Pearlz, Bead Lines, Asunta (sort of), Drupe and Organza.  To quote the ever wise Forrest Gump, "that's all I have to say about that".