OK, I've always been 'free' in many senses of the word, but yesterday I actually did some free motion quilting, which has not happened in many moons.
I made the decision to follow the Free Motion Challenge over at SewCalGal at the beginning of the year because it seemed doable... once a month, low commitment. I did January's, worked on February's but did not get enough practice to have a satisfactory result, March's challenge was very ambiguous and I had a heck of a month filled with other things and April's tutorial is about transferring patterns, which is not what really concerns me.
So I have been going back to the tutorials posted at the Free Motion Quilt Along with Leah Day. Initially these seemed pretty high commitment since she posts one every week. I wasn't sure I could keep up! But, I have always admired Leah's quilting and the methodical way in which she approaches things. So far this year she has covered a lot about stippling, which is about the only free motion free hand pattern I am comfortable with and have used in actual quilted items. I have not done it much in a large scale, but the small scale and I are good buddies (there is a small example in the January Challenge entry linked above). So I did not go back and start from the beginning, although I did do some warm ups with some of the ideas in her tutorials. I think the idea of quilting roughly in 'rows' is probably going to help me the most, especially with patterns that are newer to me. I got to sit down for a couple of hours yesterday with some practice sandwiches and some lovely tangerine quilting thread that I got on super clearance - like .50c for a 350yd spool. I played with the Sharp Stippling tutorial for this week. This was what I got...

I like this pattern, but I don't think I currently have anything I would use it on. I felt like I was being very repetitive with the motifs in the moment and whenever I tried to throw some variation in there I tended to get myself into trouble. However, when viewed as a finished whole I don't think it looks overly repetitive. I do find that instead of 'flames' my habitual shape looks more like 'whale flukes' and I really have to watch myself because I will throw in an out of place curve instead of a sharp point if I let my mind wander too much. Truly large 'large scale' did not happen... I wonder if it is a factor of the difficulty in moving the fabric and getting the hang of repositioning my hands or if it more that my frugal self wants to fit in as much practice on the small sandwich as I can get! 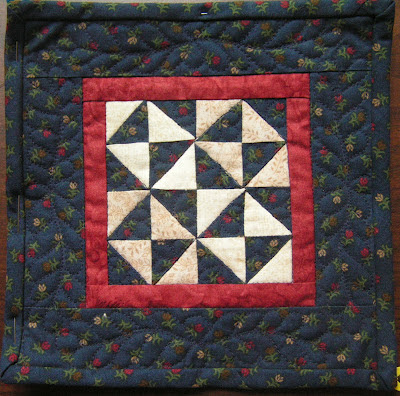 Then as a reward I quickly sandwiched a mini I just finished and FM quilted that. Here it is with the binding still pinned, although it has been sewn on by hand now. I did not mark the center at all and marked only the spine and a few diagonal placing lines for the feathers. It is cute, but I have no idea what I will use it for. Do you need a practical use for things you make too, or is the creative process enough? I thought I was getting a bit away from the practical urge (I made a mini in the first place didn't I?) but I still have those pangs occasionally (it was made with left over bits cut off other blocks after all... can't waste anything!).