Stars in my Eyes this week.

I managed to eke out a couple of responses to the Diva Challenge this week. I wasn't really "feeling it" with the star theme; although I absolutely love some of the other submissions for the week. Mine are not thrilling to me, but they are there and they are done so I thought I would post, however last minute it is. 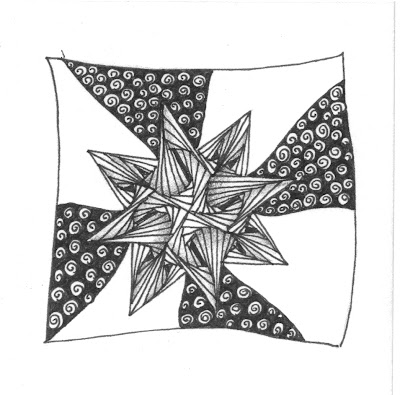 The paradox example that every star begs for 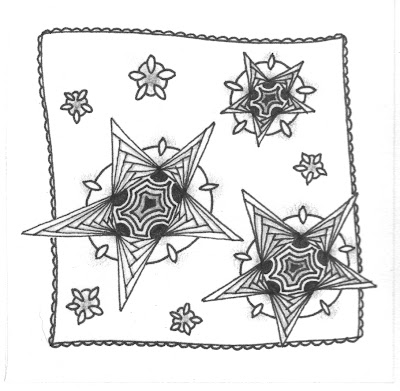 and the 5 pointed stars with Betweed, another obvious star choice, as well as a few smaller 'Floret' stars.
I was not creative enough to come up with any different ideas. I have started to work smaller in the interest of time, which seems to always be at a premium here lately. I subdivided my large sketchbook paper into 6 sections and have almost filled up the page in a couple of weeks. Here are the rest of the residents of that page. One to go, and it already has a frame, I just can't decide what to put in it... I might have to break out the dice and let chance decide.

I had to try the new-ish "widgets" tangle... that one is so much fun! They look like little eyeballs with big eye lashes to me! 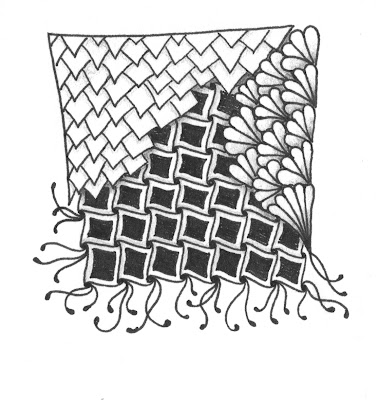 I am not sure how this Cadent grew hair... 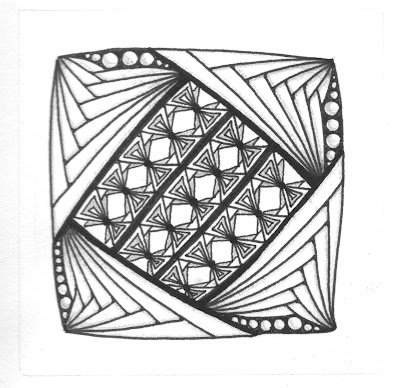 and I was watching an interesting show one evening about the 20's and 30's and prohibition on PBS and was inspired to do something sort of Deco-ish. Nothing better for that than Betweed and BowTies with a few white Black Pearlz thrown in. I really like this one, I think it is my favorite from the last few weeks.I should be off to figure out what is what with the printer and why it stopped printing in the middle of my 8 page project. I need that print out to work on the next project that is to be based on that one and is due next week... along with the in-class final and that other project in that other class that we have to work on and that website project that is almost done still needs some editing and to have a calculation redone to verify and, and, and... you know, you remember the last two weeks of the semester... death by a thousand cuts.