I guess I need guidance... 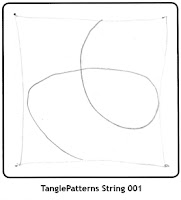 So, I guess I need guidance sometimes... or at least a string not of my own making! I blew through two Zentangle pieces for the Diva challenge this week much faster than I normally finish challenges. I don't know if it is that the string was supplied (as per the challenge) or that the given string was tile-sized, which is smaller than the usual size for me. See, I don't work on tiles, I work in a sketch book that is either about 4x6 or 8x10 so I can make my strings as big as I want. I think sometimes maybe I make them too big. The smaller size was really nice to work on and allowed me to finish much faster, although I felt a bit cramped for space at times.  Here are the tiles with the suggested string (001) from Linda Farmer's TanglePatterns.com site. The plain string is seen to the right. 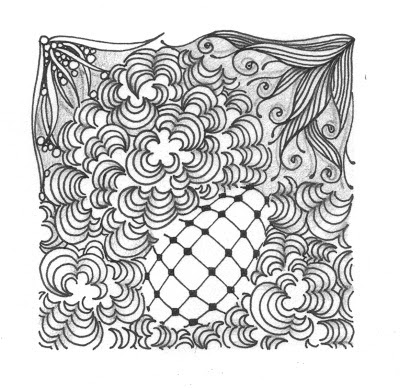 I chose Popcloud for the main part of this one. I had never used it before and wasn't sure I really liked it much but something about it appealed to me right then. When I tried it out on a scrap it was just what I needed at that moment - it is a little hypnotic curving back and forth like that and it is just right for my mood. I wasn't sure how to shade when I was done, but I like it and will certainly use it again. I'm not sure the other patterns I chose to go with it really match it in feel, but I do like the Florz in the middle as a virtual 'blank space'. Oh, I just thought of a good way to shade that part... now I'll have to try it out. 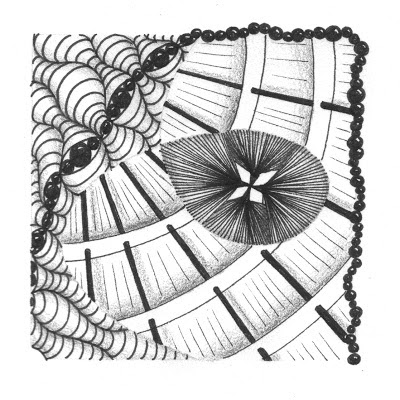 The second go around I also tried one I haven't done before, which I now can't recall the name of... girders or something like that... Girdy is the name. Super easy pattern with a nice open look to it. I like the beads continuing out of Kunstler and the Tuftid is just the density needed in the center, although I wish the last space had come out even with the others. Well, no mistakes right? At least I don't call them mistakes when there is nothing I can do to fix them! 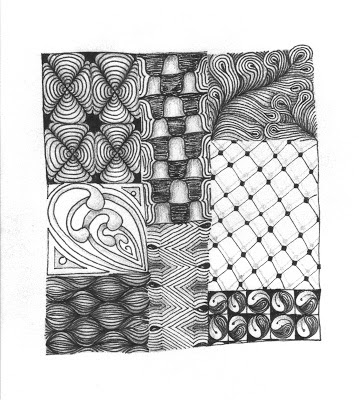 This is one I did a week or so ago in a sort of 'color block' string of rectangles. I really like the top right and bottom left rectangles and the rest turned out OK too. That one in the middle on top may be something new. This is not the best version of it I have done but I was playing some to see what else was possible.

This last one is an October project over at a Yahoo group I belong to. We were to trace out hand and use it as a string. I traced the outline and then added the creases in my palm and fingers to break up the space ("Let me see your lifeline... talk fast!). The only section I a am not happy with is the tip of the index finger which I wanted to fill in with a fine pattern so the scale was more 'finger print-ish' but overall I like it. Hope you have a great week, now I have to get back to what I am supposed to be doing! 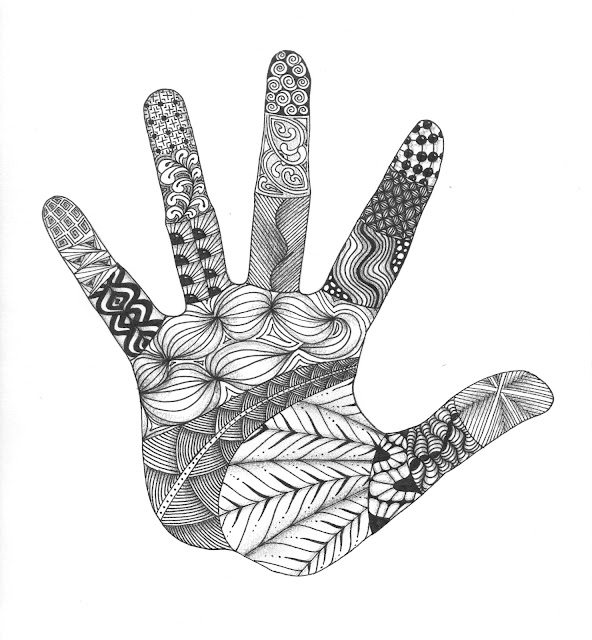