A project bracketed by world changing events - finished after 18 years!

It’s a finish -and a post written months ago and not published! Oh well! 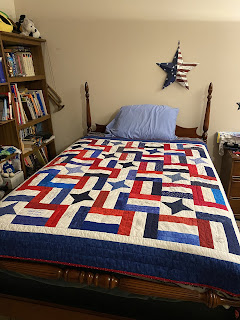 I am fairly impressed that I found the blocks for this quilt in the first place and also that I was able to put them together and finish the quilt in less than a week. The blocks were the result of an exchange organized on a quilting board in the aftermath of the 9/11 terror attacks. There are blocks from 36 different states and 5 different countries. I must have put them away and forgot about them. I ran across the box In the closet a couple of weeks ago and it took me a bit to remember even having participated in the exchange.
Being that the 4th of July holiday was approaching and it was my son’s 20th birthday, and seeing that he is all about red, white and blue flag paraphernalia due to his holiday birthday I thought I might try to get it finished for his birthday. I actually managed to do it!! It might be a record for me to get a bed sized quilt done in that time frame - granted, almost all the blocks were done already, but I did make a few more stars and had to resew a few of the blocks due to size problems and got them sewn together, a back made, everything layered and quilted together. Definitely a reason to celebrate! It is a quilt with an interesting provenance, considering that it was begun in the aftermath of a significant terror attack that shook the world, and completed during a global pandemic that has drastically altered daily life for months (so far), all of which is included in the label!). 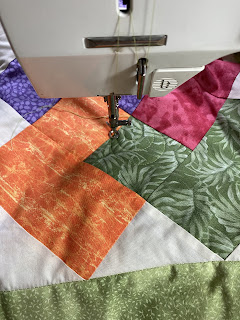 Since I finished that on Monday I have also finished quilting a very old wall hanging that has been layered  for quilting for at least two years since the last time I had a big quilting binge. More of that to come soon - I want to bind it before the "reveal" - this has since been finished along with several other things I will have to post about as well.  So, I am feeling very productive! It’s a good thing, because I have  a huge laundry list of projects in all stages of completion and SO. MANY. PLANS. for more!🤪
Speaking of which... I spent an evening sorting and ironing the scraps in the set of scrap drawers, so that was a huge step toward getting making progress on a number of scrap quilts (see this PLANS I mentioned above!) .
Since this post was written, I have finished the wall hanging I was doing, another wall hanging, a small Christmas quilt and completed a top that had about 1/3rd of the blocks done and one that I started and finished in about 3 months.  I am also currently a little more half way through a small jelly roll lap quilt.  so much to post about!
Read more »
Posted by Eden at 12:36 PM No comments: