This week's Diva challenge for Zentangle was to "break free" from constraints and boundaries. Whatever it was/is that contains us we were supposed to defy that with our tangles. What a happy coincidence since I have been on a bit of a mission for a few weeks now to not be so hemmed in by THE LINE. When I am feeling less that inspired and creative because I am too busy and scheduled I have a tendency to both feel constrained by but also be a slave to THE LINE of the string... and at the same time I tend to make pretty yucky strings (too much thinkin' about it and/or trying too hard). Isn't that just the way... the harder you try the worse it gets... very un-Zen. So I have been trying hard to 'let go'... which is sort of at cross purposes, no? Anyway, this challenge was right up my alley. 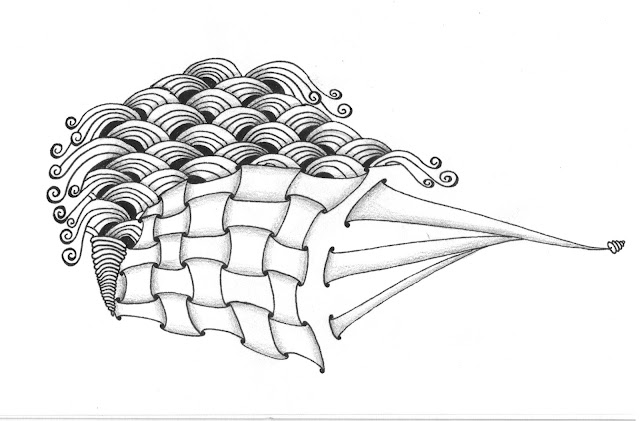 It is hard to see how much this one 'broke free' of the string because there is little visible of the original string. Basically the top boundary of the string was used as a 'suggestion' of where to begin to end the Hill and Dale (a pattern I keep meaning to publish the steps for-let me know if you are interested).  In the bottom section the Huggins (or whatever it is) 'leaked out' into the next section and also did not strictly follow the boundary of its own section. There were only the three sections to the string. 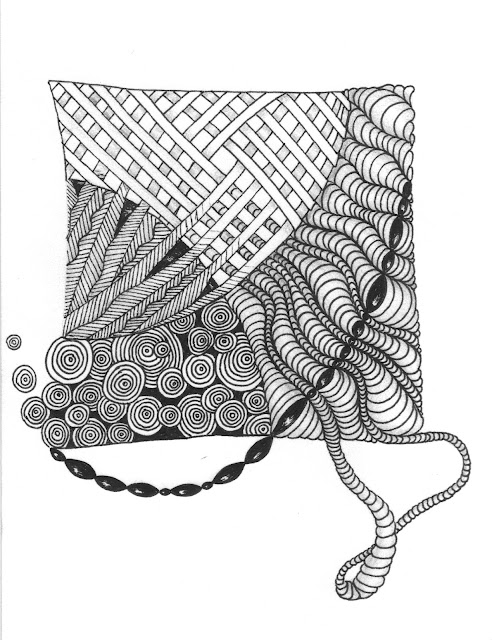 This one clearly shows the boundaries, but also leaks out of them. The Kunstler leaks into both the Lap and the outside. The Meer leaks a little into the Lap and the Printemps floats out of bounds as well. The Lap actually dictated lines in both the Meer and the Kunstler as well. I like this one the best - see my need to 'stay in the line' shows even here where I am trying to break free!!

Oh, and imagine my surprise when, the other day while surfing someone else's Pinterest board, I found this little banner for Linweaving.com with my three patterns on it; Groovy, Islette (spelled wrong) and Brainz. I don't think I ever published the breakdown for two of them and had never even heard of the website. I am not even a member of it, yet I am apparently one of the 'designers'! What a surprise when there are so many people much more deserving of that designation than I! I was also a little taken aback that I am apparently on the sight in the form of my patterns and had never even heard of it. I mean, I know what I publish on this blog is 'out there' for whatever purpose anyone has in mind... but I was just surprised to actually see it happen and without my knowledge. Not sure how I feel about it actually, I am still processing. I guess the really nice thing about the whole experience is that I ran across some really great 'new to me' patterns by people I knew about before but had somehow managed to miss (like Lap, by Lizzie Mayne). Now I need to draw out the breakdowns and add them to my file.
Hope everyone has a great end of the week and weekend!