It is an online quilt show!

You mean I can look at finished quilts... all evening... with me feet up and my pumpkin spice tea within arm's reach? I am all for that! Amy's Creative Side is hosting a fall blogger quilt show this week. I can't seem to grab the button without grabbing the code window as well... so just follow the link in red above and it will take you there.

I have browsed quite a few fabulous quilts already and plan on perusing more later on. For now I thought I would join the party, er I mean show,  with my latest finish. OK, so it was done in June, it is still my latest finish. It was a UFO started over a decade ago so I was happy to have to get it done.  A flannel quilt in June is about as appealing as a popsicle in the Arctic, but hey... I'll take what I can get, when I can get it. It is a Bow Tie quilt in the Magic Circle setting done in plaid flannels.


I began this quilt in 1999 using freezer paper and a set of plaid flannels heavy with reds. I had half a thought to make it for my grandfather who was recovering from a broken arm/shoulder and living in a rehab center at the time. It seemed masculine and appropriate. Piecing went slowly because I was doing it the old fashioned, set-in seam way using the freezer paper templates to fussy cut the stripes and their edges to guide my machine sewing. He passed away before I got very far. I put it away and got it out to work on periodically over the next dozen years. I could only take that kind of piecing  for so long. Finally I had enough complete magic circles  to call it FINISHED... or did I? I still had fabric left! Sigh. I decided that I should make it one row larger on both sides or use up the rest of the flannel, which ever came first. This time I had planned my father as the recipient as he had suffered a debilitating stroke and is now confined to a wheel chair in a nursing facility. It ended up being 20 blocks total, 5 x 4 setting with each magic circle having 4 bow ties for a total of 80 bow tie blocks. And I STILL had a little fabric left! 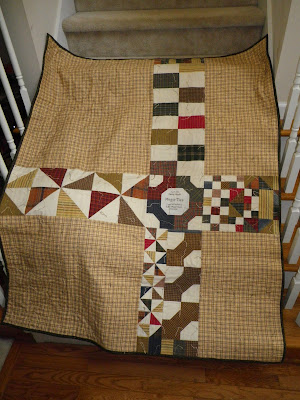 With the top finished I set about finding just the right plaid flannel for the backing... no mean feat in APRIL and MAY!  I found something acceptable and set about piecing a few of the leftovers together to make it a bit bigger. That turned into a mission to use up EVERY LAST SCRAP of flannel from the original set. It was also a bit more challenging to do than I imagined. I built the label out of smaller bow ties and included it at the intersection of the stripes. I pieced the center octagon out of a single piece of muslin so it would be easier to write on. I managed to use everything I had except a handful of pieces of less than 3" and one weird colored, brownish purple fat eighth that I didn't use at all.
Then it came time to quilt it... UGH! not my strength to begin with but I had no time to waste, it was coming down to the wire. I layered it up and started quilting. My machine WOULD NOT quilt this quilt. It had been tuned up and cleaned recently, it was sewing fine, it would quilt on the backing and batting with no problem but skipped 8 out of 10 stitches through all three layers. I tried three layers of other fabric and batting with no problem, tried new needles, different thread... NOTHING worked.  I had already decided the name would be Magic Ties... Magic because of the setting, Ties because they are bow ties and because there are magic ties between a dad and his daughter, family ties etc. This was my quilt muse's subtle way of telling me that "Magic Ties" needed to be TIED, not quilted. So tied it was, every three inches with the perle cotton strings on the back so as not to disturb the look of the front. I bound it in a perfect regular cotton fabric as flannel would be too bulky and not wear as well (not to mention being nearly impossible to find in late May as mentioned before). I LOVE this quilt and LOVE my dad too so it is a good match. I hope that it brings him some warmth and comfort this winter. I miss him, as we do not live close by. I miss the capable, independent, funny person he used to be before his stroke even more. Happy Father's Day Dad.
Posted by Eden at 6:28 PM