Decisions about camo and 'made fabric'...

This week I decided to work on my block for Operation Uniform over at 15 Minutes Play. Victoria sent along some scraps and bits from some army uniforms she was given and challenged me (and a few others) to make a 12" finished block with that camo fabric and some of what she calls 'made fabric'. Made fabric is sort of like the crumb blocks I have been doing; bits and snatches sewn together to make a usable sized piece of fabric... You know, like our fore bearers had to do sometimes when they were using old clothing and flour sacks for quilt making. 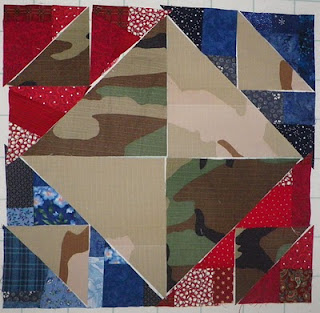 I sat down last night and looked at the camo, browsed some block patterns and tried to come up with what might do them justice and use the fabric most efficiently. Nothing with pieces too small because you lose the camo-ness and the multiple fabric nature of the made fabric. Nothing too pointy because of the bulk and the many seams. I always start looking at blocks with a meaningful name, even though no non-Quilter will probably ever know what the block is called. I came up with Birds in the Air. OK, forget that these are Army uniforms for a moment and try to follow my line of reasoning... this block brings to mind the awesome might the U.S. commands in the air, primarily Air Force and Navy. I live near an Air Force base and there is NOTHING like the roar of fighter jet overhead to make me feel somehow protected (maybe corny, but true for me). My son even used to call them "protect jets". So, for good or bad, this block makes me think of all U.S. Armed forces and the role they play in protecting the U.S. and those that need it all over the world. 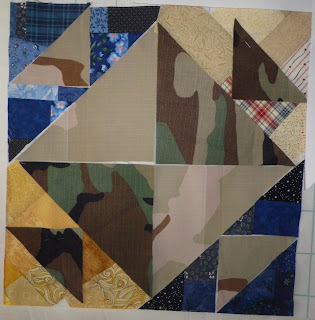 So much for the block. Now I have some fabric choices to make. The red and blue were my original choices, but I think that there may not be enough contrast between the dark camo and the red...how about the neutral (top right) or the gold (bottom left) ? I could do a red star to raw edge appliqué in the middle of the four camo triangles. What do you think? I think I know which way I am leaning, I'll see what other opinions I get.

To see what others are up to this Monday head over to Patchwork Times.
Posted by Eden at 1:53 PM