So when I get really old can I just have people call me "Vintage"...


because "Vintage" sounds so much more elegant and valuable than "old"! I have been mucking about in my storage areas in the sewing room and have unearthed the vintage quilts I have from my grandmothers. It turns out that my dad's mom and older sister quilted quite a bit and I have a complete quilt, a quilt top and some salvaged blocks from a quilt that was mostly in tatters that were all made by them. My mother had possession of these prior to my own interest in quilting and not being a quilter herself, she gave them over to me for care and conservation. According to my dad they all date from the late 20's to the mid to late 30's. I was afraid to use my usual clamping method of hanging quilts for photos due to their age. I chose instead to drape them over the shrubs behind the railing on the front porch steps. Forgive the odd lumpiness and shape. 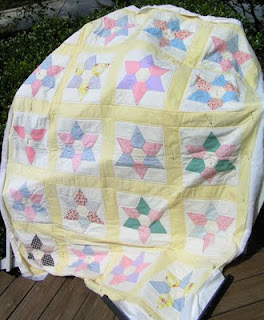 I carefully washed and started hand quilting the one that was just a top in order to be able to display it.  I began some time ago (10 years or more) and really need to get back to it. It had been tied with a wool batting at some point. The tie sites are pretty pulled and a few have tears so re-tieing was not really an option. If I had it to do over I would have used cotton batting, or even better, wool like the original. 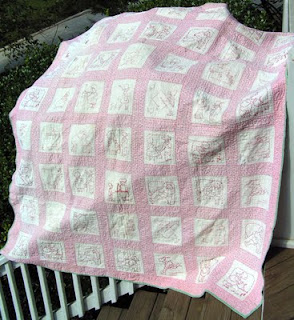 The complete quilt is a red work quilt depicting nursery rhymes and stories. It is in fair condition except for a few things. There is one section that is obviously sun damaged and the fabric had faded and even disintegrated in one place. The red work floss is broken and has come un-stitched in a few places as well. It is clear that there were two quilt makers, my grandmother and my aunt, because they used different weight floss/yarn. My father remembers this quilt vaguely because they pulled it out to look at the nursery rhymes represented in the red work in order to get ideas for names for the new baby, my dad's younger brother. My youngest uncle was born in the early 30's so it must predate his birth if my father's memory is accurate. Below we have Polly putting on the kettle, Mary, the contrary gardener and Jack and Jill on their famous errand. 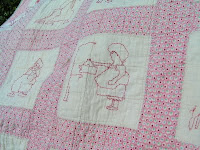 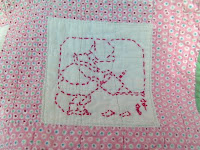 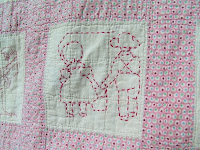 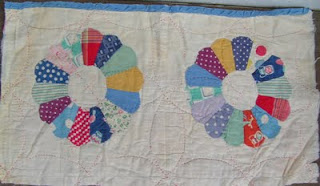 The salvaged blocks I want to carefully wash and mount in shadowbox frames. The quilt was a Dresden Plate pattern, hand quilted in a wineglass pattern. Dad said that he remembers grandpa making the template for marking the quilting pattern out of heavy cardboard. This was made after the previous two quilts because scraps from both can be found in the 'plates'. It was used much harder however, as the fabrics are very faded and worn. 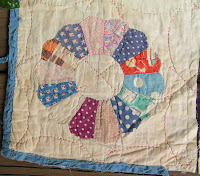 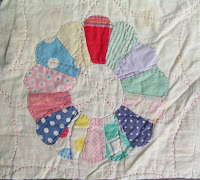 This is the only one with a printed backing... and what a backing it is! 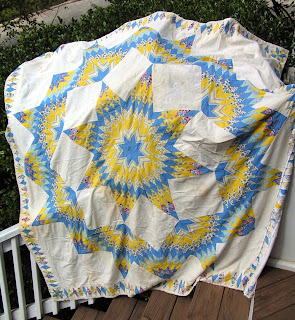 The last quilt top I have actually came from my maternal grandmother. She was not a quilter herself, but at some point along the line purchased this quilt at an estate sale. I am not sure if it was a full quilt at that point, or just the top, but the design is spectacular. I would love to know the era of this one and may take it to the quilt appraiser at the local quilt show in a few weeks. If I could brighten it up a bit with careful treatment without compromising the fabric integrity I might quilt this one also so it can be displayed. I know it would do nothing for its vintage value, but I imagine that the original quilter would want it enjoyed, rather than hidden away. 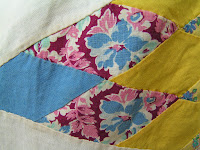 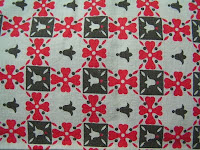 My last vintage treasure is a set of four pieces of fabric measuring 32"by 36", hemmed on three sides with the fourth being a selvage edge. I have no idea how old it is but it is in good shape except for one piece that was torn and mended in the middle at some point. It would be great to be able to put this up for sale to someone who would use it in a vintage project or repair, but I have no real idea of how to do that, especially when I know so little about the fabric. Any ideas anyone?
Posted by Eden at 3:21 PM

Email ThisBlogThis!Share to TwitterShare to FacebookShare to Pinterest
Labels: vintage