I have made Crumb progress... but only in my head!

I had really wanted to get a few things actually quilted... this is called 'quilting' right? Not 'piecing'? However (and there always seems to be a 'however' in my life) I got caught up in a piecing project (shocking I know!) that is for someone else and has a deadline and must be sent out to quilt which will take goodness knows how long. So, all my limited sewing time has been spent doing that. It is turning out fabulously, if I do say so myself (see the past few posts and tune in later this week for a photo of the final top photo) but it has kept me from completing even the small top I was actually quilting in January when I ran out of the right color thread. Drat, foiled again! 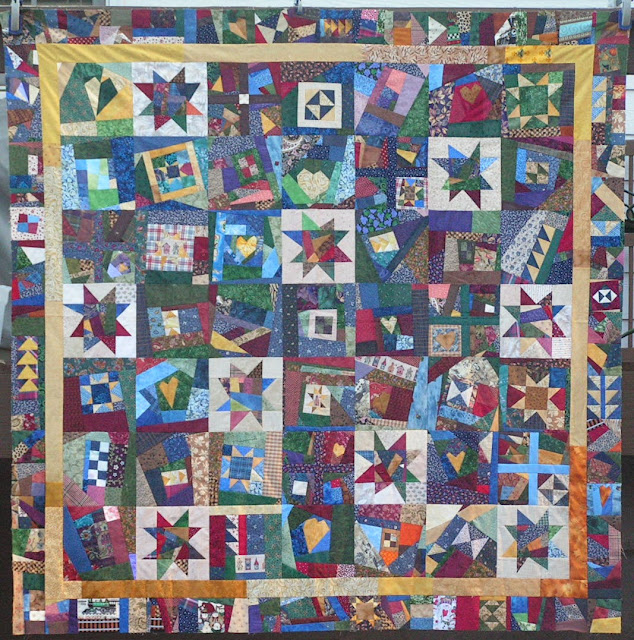 So this is a re-hash of the final crumb top, Hearts of Gold. I plan on quilting it... and this is where the 'progress has been made - I made an actual DECISION! with a gold toned variegated thread in a large overall meander. I don't think it can stand too much of a pattern since there is already so much going on. I may do a straight line grid to stabilize the whole thing before I start. I will also certainly take special care with my hearts - probably echo quilt around them a couple of times and work the meander around them. There are a few other crumb tops, some of them actually quilted! over at the Crumb Round Up.
Posted by Eden at 8:21 AM

Email ThisBlogThis!Share to TwitterShare to FacebookShare to Pinterest
Labels: crumbs