This week's Diva Challenge, guest hosted by Erin from the bright owl was just that for me... very challenging. I guess that is what a challenge is all about right? I like the Zendalla form for tangling since I am a often a slave to symmetry but I struggle to keep them 'simple' as in not too busy. I really struggle with that when they have lots of small sections. This Zendalla template provided for the challenge this week did have lots of small sections. I tried to find patterns that worked together to form a unified larger look and in the end used the ellipse in the circle only as placement guides for the rays (the center point of the middle V is about at one of the foci of the ellipse) and did not 'fill it' with a tangle of its own. I like all the individual elements, I am just not sure if they harmonize all that well together. Anyway, here it is, this weeks challenge entry. 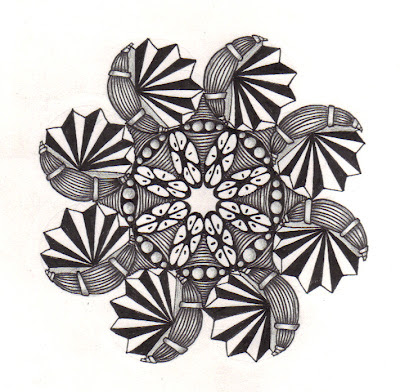 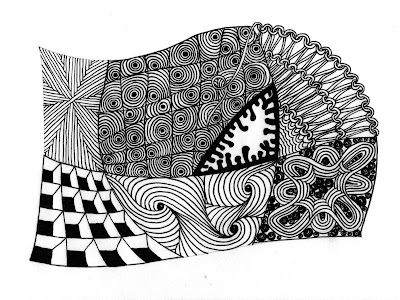 What follows is sort of a collection of some of the things I did this summer mostly while away in the mountains. This was an exploration of Auraknot  (which I initially thought might be constructed from the inside out like a Log Cabin quilt block... how wrong I was!), Knyt and Verve, all of which I love as patterns. 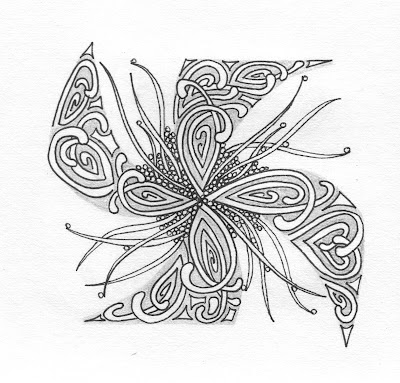 This one I did early this summer before we left but I don't think I posted it before. I didn't like it at first but it has definitely grown on me 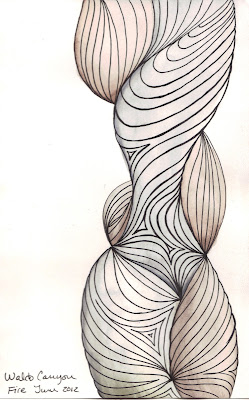 This was done with some watercolors and pen while listening to the radio coverage of the Waldo Canyon wildfire and praying that no one got hurt and that my brother's house didn't go up in smoke and ash. The grays and browns and roiling texture all inspired, of course by the smoke columns rising from the fire. 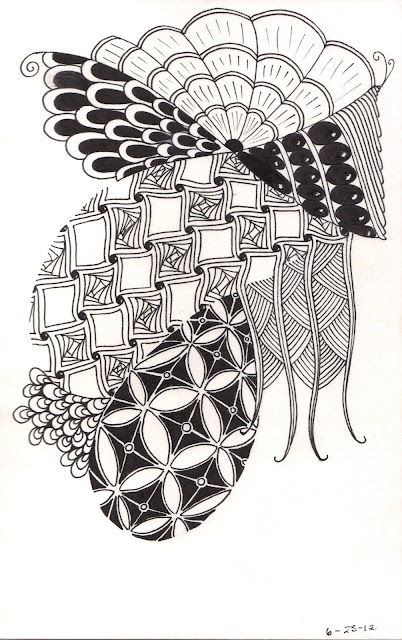 This one was my unpublished exploration of the Cadent challenge - I love this variation... sort of Cadent meets Paradox.

This one was from earlier this summer and I like the simple string and the demonstration of what careful choice of contrast can lead your eye to see. 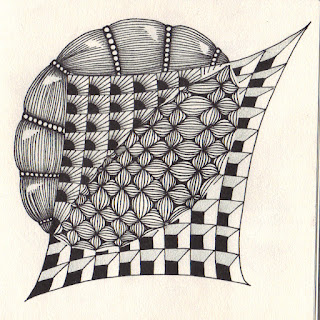 I also played a lot with paint samples this summer. Most of them I have given away as bookmarks, but I still have these two. It is lots of fun to be using rich colors as a background, but Micron pens will smear on all the ones I tried so I used a fine point Sharpie instead. 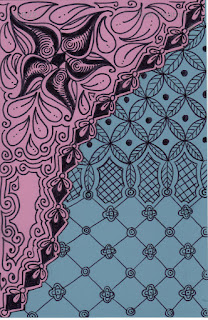 I made two really nice gift bags with tangling all over the front and did lots of practice doodles and played with watercolor paints some. Other than that I accomplished some sewing which I will be sure to share at some point and did some hiking with the kids, read a lot of books, mostly to the kids, took some great photos, spent time with my mom and generally enjoyed the cooler drier weather in the mountains. Now it is time to get back to civilization and get ready for school.