There has been a lot of reorganizing in the sewing room going on since the holidays in order to give my 11 year old a more organized space since half of it is his room. I hope to be able to eventually close the closet door which will free up a few more inches of the design wall! What a goal... 'close the closet door' (shakes head). 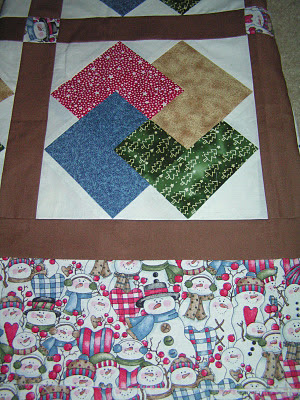 In the mean time I have a bunch of clear floor space and have managed to layer and baste a mid sized quilt top and backing (the Christmas Wreath from last month) and am working on the backing for the next quilt. This one is a pattern called The Winning Hand... it uses Card Tricks blocks and I used winterish fabrics including an adorable snowman print for the borders and corner stones. It was made in 2005 when I was teaching this pattern in the JoAnns Quilting 101 class. 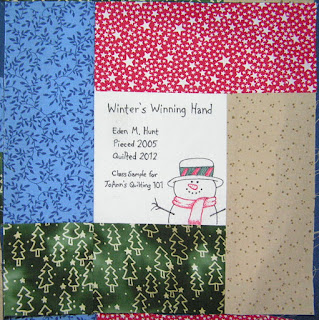 I like to use up the left over pieces from the top in the backing these days so I made some blocks in order to extend a remnant piece of gingerbread men I bought for the back. I am going to force myself to ignore the fact that the rows of  gingerbread men are not straight with the grain of fabric... it is only the back of a quilt right? Now I need to figure out how to get everything to work together and be the right size. The toughest part is making the backing large enough without getting the blocks too near the edge where they might get cut off when lining everything up during the layering and basting process. It would be so much easier if you could just make the back exactly as big as the front and have everything perfectly lined up! I think I made too many blocks and will have some left over unless I just sort of throw them together - ugh, I hate left overs, especially cute ones. One of the blocks is the lable so that one certainly needs to go in. I also have lots more of the tone on tone cream shown down there by the windmill blocks in the lower right to fill in around the other blocks. I may put another stripe of that down the left side of those windmill blocks and trim some off that large gingerbread men section so I have a strip of that to go somewhere else to balance things out. Really I think I am obsessing about the quilt backs a little too much lately... I am sort of making another top without adding to the unquilted tops pile, and not buying new fabric and not wasting existing cute fabric at the same time!

For more of what other's are up to this week, check out Design Wall Monday over at Patchwork Times.
Posted by Eden at 9:34 AM