Not feelin' it this week...

but trying all the same, and that is what its all about right?
I am weighed down this week by sadness for a friend who lost her 8 year old daughter to a chronic and ultimately fatal disorder that had plagued her from birth. It was particularly poignant for me because I have known this woman for years and my own 8 year old was due the same week as her girl. He has lived, so far, a pretty charmed and healthy life. Whenever I read of the difficulties this little girl was having all I could do was feel both thankful and a little guilty for my own good fortune.

I have also been following with a heavy heart the blogging of a person I have come to respect through her writings as she begins the process of losing her father. Her struggle is unlike mine was this past December in that her father has been able to make the decisions for himself and has had time to have cherished conversations with both his children and grandchildren. My father went precipitously and once the decision was made to keep him comfortable he was asleep and gone within 24 hours, not even long enough for me to get there. She has been kind enough to share some of her feelings about this time and the loss she can see coming.

Between the little girl and the older man, both of whose stories share aspects of my own father's final days I have been introspect and a bit down. On top of that, my three year old has so generously shared yet another illness with me so we are both down with fatigue, wracking coughs and in her case a pretty ferocious fever. We have been sleeping a lot! I have also been completing the final steps on a quilt that will be gifted to its new owner late next week. It is finished! If the wind ever stops blowing I will take a photo...its official portrait. I have fallen off the New York Beauty wagon a bit, I got one new one done... and I don't like it much which is discouraging. I decided to draw a bit while the little girl slept in my lap yesterday and got one done that satisfies both the Zendalla challenge over at The Bright Owl and the Diva challenge for the week. Take a look... 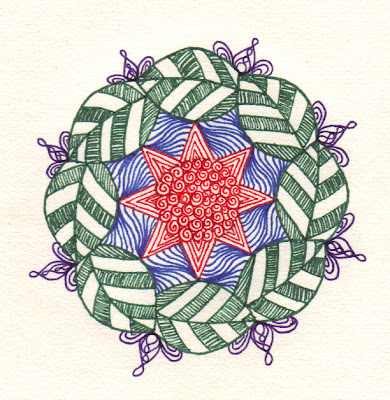 The evenness of the lines and regularity of the motifs is not up to my usual standard... but everything withstanding I like the representation of 'things earthy'. I will play with this Zendalla template more, and maybe do another with earthy things... there are lots of tangles that remind me of earthy stuff! But this is it for now! I am off to paint a certain 3 year old's toe nails and probably read a story or work on rhyming and then go to bed early!
Posted by Eden at 7:58 PM