This last week was spring break around here and I figured with the two youngest home by myself there would not be much sewing time, but it turns out that I must spend most of my time going back and forth from school, the bus stop and activities because with those all on hold there was more time than I thought. I also basically didn't cook and the youngest must be growing because she napped several times late in the afternoon until early evening. That and I could stay up as late as I wanted in the sewing room because the other inhabitant was off hiking 30 miles on the AT. 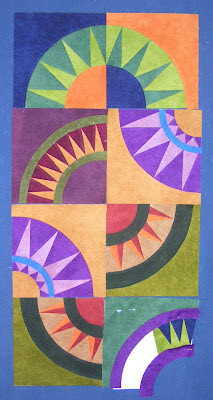 So there are two things going on in the sewing room here now. The first is my new weakness, New York Beauty blocks. You can read more about my fall from my former grace (not having gotten sucked into tempting new projects)  here - but the short story is that I was pushed over the edge by a Design Wall post of a friend from last week. I have only two more blocks than when I 'started' because the hikers got home severely limiting my late nights in the sewing room. However, despite the lack of time my other problem seems to be that I am getting stuck with colors now... I like what I have so far, don't want to duplicate and am worried about ruining the feel and balance of the mix. Ugh. At first I had not expectation and therefore was totally free... now I feel constrained by what I already have and am stuck. I actually like the half finished block better in the photo than IRL so maybe it is OK. The green and purple was originally supposed to go on the gold and red paper pieced section but they just didn't get along. My curved piecing is also going down the tubes. I started out pretty well and have maybe started to think about it too much or something because it is getting worse instead of better. I have to find a way back to the 'fun' with this one or I will never get enough to do anything with. 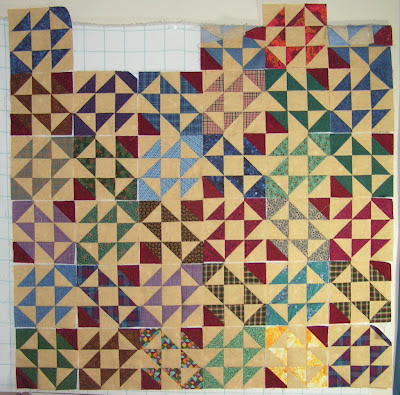 The other one that I am working on as leaders and enders while I paper piece is this ancient 2.5" HST project. These are all waste triangles from the pinwheel bed sized quilt pictured below that I made ages ago. I began trimming down the HST sets leftover from all those corners and sewing them into blocks long ago when I was obsessed with the pattern from the flannel lap quilt also shown below, which was also made ages ago. The untrimmed HST's have been sitting in a basket awaiting trimming and sewing together for a long time... they sort of feel like part of the decor of the sewing room by now. I realized that I could actually almost see the bottom of the basket and thought this would be a great leader-ender project. I would love to get this together and decide what else it needs to be 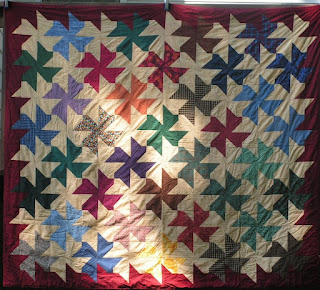 'finished' as one of my quarterly FAL projects. I am within a few blocks of being done and then I just have to do a little moving blocks about to establish balance and then I can piece the center together. I just now realized that they are arranged differently than the flannel lap quilt... I guess the accent corners in the lap (pink) are on every block and the accent corners on the one above are on every other block so it looks very different... interesting. So I guess I might play with the arrangement  some as well and see what developes. Any suggestions for what to add to the outside to make it larger?  I have a stack of HST's of the background tan and the solid red from the border of the original, but I am not sure if it is enough to do much of anything with. I will have to count and see. If nothing else I will use them in the backing somehow. 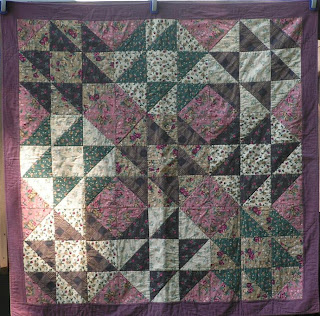 To check out what other people are up to this week check out Design Wall Monday over at Patchwork Times.
Posted by Eden at 11:14 AM