Yay! Some Progress to Report on an Actual Quilting Project!

Don't get too excited... its not like it is on the "Finish Along" list for this quarter or anything, it is actually a new, high-ish pressure project with and actual due date and other people depending on me getting it done. Ack! Perhaps that is why there is actual progress to report!

I posted a previous design wall Monday about a quilt based on 9 patches that I had begun with some left over 4 patches. This is what it has grown into, mostly over this weekend. I still need to do some figuring but I think I am about 18 blocks from finished on this one. I am also thinking that it needs a border with a waving vine and some machine applique, possibly raw-edge leaves to soften the patchiness and angularity of it all. 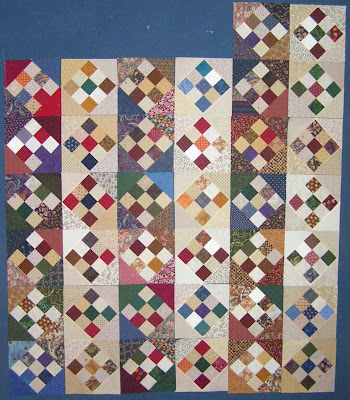 Ultimately it will be 8 blocks high and 7 blocks wide, beginning and ending with a 'dark' row of blocks left to right. The border will be in the neighborhood of one of the darker gold/tans in the neutral and the proposed vine would be a nice solid dark green, to the forest/loden end of green. The leaves added to the vine will be scrappy to echo the central part, but not all over the map... mostly darker colors. Note that I am not totally in love with this quilt yet. It seems like so much chaos. I have tried an alternating layout but that is much more chaotic. Any suggestions? Other possibly layouts? What about concentric 'circles' of dark and light rather than rows!? I just now thought of that... let me run upstairs and try it.


Oh yes, I think I like that one better... with the additional dark row on the right and the blocks at the top required to complete it. Do you think that looks better? Especially with a gently curving vine winding along the border? It changes my numbers a little, but I don't think that is a deal breaker at this point. Gotta love looking at a design through the lens of a camera to change your perspective.

The idea behind it is that the recipient has been teaching at the same school for something like 15 years and is retiring this year. I wanted a 2" light square for every student she has taught during that time. I will get the students I can find (like my son's class) to sign their first names in a square and I might be able to muster the help I need to write the names of the others (taken from past year books) in the rest. I still have some work to do, but it is coming along and I would be happy to hear some feedback on this one, as I am far from confident at the thought of the end result. What do YOU think? To express your insightful opinions on other people's current projects head over to Judy's Patchwork Times Design Wall Monday post.
Posted by Eden at 6:02 PM