A new week, but no new projects!

That should be my mantra... NO NEW PROJECTS! But I have made a teensy bit of progress on a current project. After sleeping most of last week because I was sick and finishing a queen sized quilt the week before which will be given to its new owner this week it was high time to get back to the New York Beauty project! So I finished up the second of two pink and orange blocks that I am still not sure I'm wild about and chose colors for the last two blocks of the set of 16. 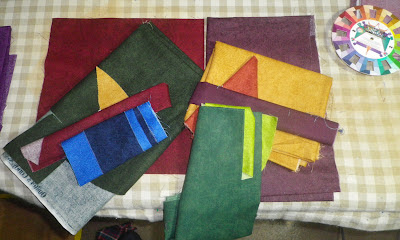 Yes, I broke out the color wheel for this one because I apparently can't come up with a nice quad color arrangement beginning with purple without a little assistance. I even got a good start on them last night watching TV over the top of the couch... I could get used to this 'sewing machine in the living room' arrangement I have right now. I have a small composite board sitting on a milk crate to my left with some batting and muslin and my mini iron for the pressing and a tiny bit of cutting board space just to the left of the machine. Aside from being pretty cramped it works great for sewing in the evening after the preteen who shares my sewing room has gone to bed - with the added bonus that my husband does not feel abandoned (just ignored! ;-) ).
So here is the progress on the last two blocks... 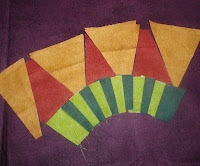 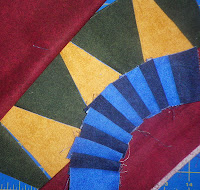 And the whole things as it is so far 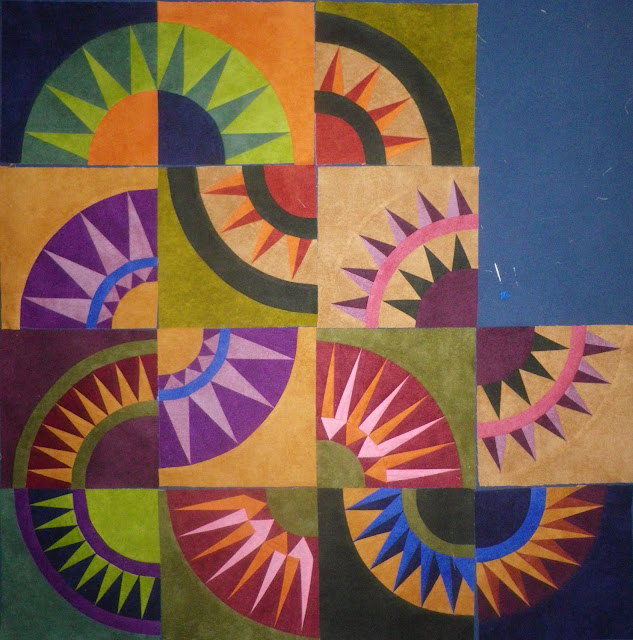 My least favorite blocks are the pink and orange 8 ray pair that are opposite each other... I think they might be too light or something. Maybe I should replace the current green center with a darker green of the same hue? Would that help? I think I am also not a huge fan of the super narrow rays - I much prefer the 4 or 6 ray blocks. This pair is also one of the only blocks that does not have a solid band between the main rays and the center... maybe that throws things off. What do you think? Should they stay? Do they add something needed to the set or should I rethink the pattern for that spot? I was also not thrilled with the way they went together... too many areas that won't iron flat and lots of bulk at the join between the 8 rays and the 4 rays.- there are no actual puckers, but those areas won't press nice and flat.
So there is my design wall today. What does yours look like? Check out Design Wall Monday over at Patchwork Times to see what everyone else in blog land is up to this week.
Posted by Eden at 10:24 AM